Dongara Marine has been contracted to build a new lobster fishing boat for a highly regarded Western Australian fishing family.

Daydawn Fisheries approached Dongara Marine directly for the new vessel, with key personnel from each company working out the core vessel and systems characteristics along with relevant budgetary and production schedule estimates, to ensure project feasibility prior to engaging Southerly Designs for the formal naval architecture and engineering design.

The hull design and propulsion arrangement are closely based on those used for Dave Perham’s Force of Nature, delivered by Dongara Marine in May 2020. Like Perham, Daydawn operates out of Geraldton, Western Australia and its principals were therefore familiar with Force of Nature. They nominated it as the platform upon which to develop their own highly customised vessel.

The resultant design is a step away from the wheelhouse with flybridge arrangement most typical in the Western Rock Lobster fishery. Instead Daydawn have opted for an arrangement that positions the composite wheelhouse 725mm above main deck level and dispenses with the flybridge station.

Below decks there are four separate sleeping areas: a single berth area in the bow, with steps down and aft to the main accommodation area. This comprises two single berths in an open area and two enclosed cabins: one single berth and a skipper’s cabin with Queen-size bed. Laundry facilities and a toilet / shower compartment are also fitted.

This will provide significant flexibility to use the vessel for duties other than the primary lobster fishing role. For that, the boat is equipped with five live tanks providing capacity for 90 baskets (2.7 tonnes) of lobster. A bait freezer is fitted in the tiller flat.

As with Force of Nature, twin Scania DI16 076M diesels are fitted and drive fixed pitch propellers through ZF gearboxes. Daydawn have opted to have the engines at a higher rating (736kW compared to 662kW), and this is expected to give a speed of 25kt.

Based in Geraldton, Daydawn Fisheries is a third generation family fishing company. It, and the controlling Bailey family, are well known in the Western Australian maritime sector, particularly through the 24.95 metre Daydawn, which was the largest lobster fishing boat of its type built in Australia when delivered in 2016.

That vessel, which was sold in 2021 to make way for the newbuild, was also a Southerly Design and featured a composite wheelhouse manufactured by Dongara Marine. Dongara Marine has also previously built a 6.2 metre centre console tender for the fishing family.

“We’ve seen the quality of the work the Dongara Marine team do, both on our boats and others, and have been impressed by the way they have worked with us to get what we want. We are really looking forward to the new boat coming together.” 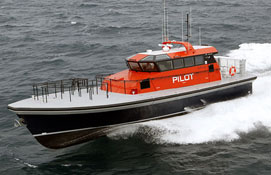