Design and construction of this first Berkeley Class pilot launch was financed and overseen by Dongara Marine Director John Fitzhardinge with the goal of “producing the best pilot boat in Australia”.

Delivered in 2015, Berkeley quickly established itself as the pilot boat of choice for both Fremantle Pilots and the Fremantle Ports team that operate it. Their comments reflect the achievement of the initial goal.

“They have delivered a remarkable pilot boat. It has excellent sea-keeping capabilities and incomparable comfort of ride as well as excellent stability, hull interaction, manoeuvrability, wheelhouse visibility and layout.

“… the Berkeley Class is the Rolls-Royce of pilot boats….”

“Our pilots have found Berkeley to be both drier and more stable than other pilot vessels they have experience with, and both those attributes contribute to safer pilot transfer.”

Fremantle Pilots acquired the vessel in 2016 following a rigorous selection process that compared its performance and whole-of-life costs with those of other designs available on the market.

The vessel operates reliably on a demanding schedule to ensure shipping operations are maintained 24/7, averaging over 3000 running hours per year and has supported successful pilot transfers in weather conditions including squalls to 50 knots and five metre seas.

Construction of the vessel was a joint effort between Dongara Marine and Fine Entry Marine.

“After using Berkeley for over a year, and undertaking a detailed financial and operational analysis of it and other options, it was clear to us that the Berkeley Class was the best pilot boat available on the market.” 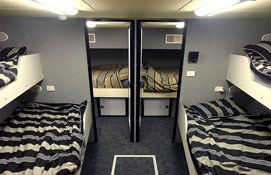