Fremantle Pilots has been providing Marine Pilotage services in Western Australia’s major port since 1844 but only recently purchased its first pilot boat, opting for the locally designed and built Berkeley. Previous pilot boats have all been owned and operated by the Port of Fremantle.

Prior to committing to such a major investment and milestone, Fremantle Pilots undertook an in-depth analysis of various pilot boat options available to it. Managing Director, Captain Greg Tonnison, is unequivocal about the results of that rigorous assessment process.

“After using Berkeley for over a year, and undertaking a detailed financial and operational analysis of it and other options, it is clear to us that the Berkeley Class is the best pilot boat available on the market,”

In reaching that conclusion Fremantle Pilots drew on the vast experience of its own staff and those within Fremantle Ports; detailed financial and technical analysis; its intimate knowledge of the port; and expert advice from specialists such as marine surveyors.

The company’s Marine Pilots are widely experienced Master Mariners who, as a matter of company policy, have obtained Master Class 1 certification and gained significant pilotage experience in other ports prior to joining Fremantle Pilots. As a result they have had exposure to a wide variety of pilot boat designs operating in ports around Australia and internationally. This includes in the Western Australian ports of Albany and Bunbury, to which the company also provides licensed Marine Pilots. Both ports have acquired new pilot boats within the past six years.

Tonnison explained that, prior to the acquisition, the pilots had extensive first hand experience of Berkeley, the first of a new class of pilot boats designed by Southerly Designs and built by Dongara Marine. It had been operating in Fremantle since June 2015, giving them well over a year, including two demanding winters, to acquaint them with the boat.

“Whereas in the past Fremantle has typically operated with two pilot boats – one faster one for quick transits in good sea conditions and a slower but more seakindly vessel for heavy weather – Berkeley has become the pilots’ vessel of choice, fair weather or foul,” he said.

“The boat has proven capable of achieving 33 to 34 knots under operational conditions, and typically operates at an economical 24 to 25 knots, giving it the speed to keep up with the port’s shipping schedule on even the busiest days.

“Under demanding Indian Ocean conditions, Berkeley’s seakeeping capabilities have established it as a genuine all-weather boat, to the extent that ship movements are no longer restricted by the ability to safely transfer pilots in extreme weather but rather by in-harbour manoeuvring and berthing considerations,”

As an example, Captain Tonnison cited an instance in the 2016 winter in which Berkeley transported pilots to an inbound ship at 20 to 21 knots, and then conducted a successful pilot transfer, despite squalls of up to 50 knots and five metre seas. The conditions, while not preventing Berkeley from safely transferring the pilot, ultimately proved too severe for the ship to enter the harbour.

Contributing to the pilot boat’s all-weather capability is the inclusion of a water ballast tank that can be filled to increase displacement and further enhance the hullform’s innately excellent seakeeping qualities. Fremantle Pilots has found this makes a big difference to its operations when sea conditions are at their worst.

The hull design benefits from the more than 40 years of experience with high speed fishing, patrol and offshore crew boats that resides within Southerly Designs, which has had over 400 boats built to its designs. This includes the experience of John Fitzhardinge, who is a Director of both Southerly Designs and builder Dongara Marine. The Berkeley Class draws heavily on his personal experience designing, building, and operating his own commercial fishing boats operating off the Western Australian coast.

He paid tribute to the Western Australian companies behind its design and construction, saying: “They have delivered a remarkable pilot boat. It has excellent sea-keeping capabilities and incomparable comfort of ride as well as excellent stability, hull interaction, manoeuvrability, wheelhouse visibility and layout.

“The boat has spacious below-deck compartments and engine room, a world’s best WA-built fendering system and improved fendering fixing design. There is very little spray onto the foredeck and wheelhouse,” he continued.

“Our pilots have found Berkeley to be both drier and more stable than other pilot vessels they have experience with, and both those attributes contribute to safer pilot transfer,” Captain Tonnison said.

“This aspect of the design both eliminates the gap between the ship’s side and pilot boat deck at the point of transfer and reduces the pilots boat’s tendency to rotate away from the ship,” Tonnison explained.

Onboard the pilots have found the resiliently mounted cabin to be a relaxing workplace, a factor which is important to them given the responsibilities of their role, the irregular work hours, and sometimes long times spent onboard.

“They also appreciate that the Berkeley layout provides a dedicated pilot planning station that is physically separated from the crew work area. This, they find, enables both pilots and crew to better focus on their tasks while in transit,” Tonnison added.

Strickland summed up his team’s view of the vessel in emphatic terms, saying: “At 18.5 metres measured length and just over 19 metres overall with a 6.1 metre beam, the designers have achieved the perfect-sized pilot vessel to operate on our coast and particularly for the wave periods and sea states encountered off Fremantle.

Impressed as Fremantle Pilots and their Fremantle Ports counterparts were with the boat’s on-water performance, Tonnison noted that it was imperative that his team assured themselves that selecting the Berkeley class represented a sound, long-term operational and financial decision prior to committing to the purchase.

“As part of that process Fremantle Pilots undertook an in-depth analysis comparing, in particular, the maintenance, fuel, and other operating costs of various contemporary pilot boats,” Tonnison said.

“Informed by detailed historical operating data for other pilot vessels, our study expanded and clarified information provided by boatbuilders to provide a comprehensive and truly comparable data set for the various options.

“This rigorous process, combined with our operational experience, confirmed our opinion that the Berkeley Class is the Rolls-Royce of pilot boats, and gave us every confidence that buying Berkeley represented the best value investment,” Captain Tonnison concluded. 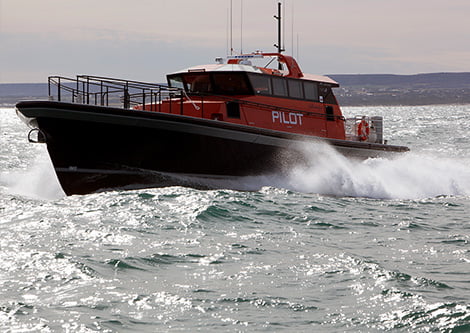