Although not the lead builder for the Daydawn and Gambler projects, Dongara Marine played a key role as the manufacturer of their resin-infused composite wheelhouses. The weight, noise and temperature insulation, finish, and maintenance advantages these wheelhouses have over conventional aluminium or fibreglass structures are driving their popularity with both fishing and work boat operators.

Fittingly for a boat that has been both designed and built in Port Denison, the Cockman family that owns Holdfast is also from Dongara the mid-west of Western Australia. Following in the footsteps of their father who began in the industry some 50 years ago, brothers Bruce and Jeff Cockman have literally been around the fishing industry their whole lives. They will both take turns skippering the new boat.

Bruce, who’s been fishing for 32 years, is currently the past President of the Dongara Professional Fishermen’s Association and a member of the Board of the Western Australian Fishing Industry Council (WAFIC). In addition to cray fishing, his experience includes fishing in the Shark Bay Snapper, Shark Bay Blue Swimmer crab and deep sea crab fisheries. He currently fishes the A, B and C zones of the lobster fishery, and is also involved in the west coast shark fishery and the wet line fishery.

Bruce said planning for new boat began in earnest in 2016 when market and fishery conditions both supported investment for the future.

“The quota system was working well, the Puerulus (post-larval lobsters) monitoring results promised good seasons ahead, and our existing boat was getting on, so we thought it was the right time to upgrade.”

The focus was to build a boat that enabled them to provide a commercially optimised response to the market forces that shape the modern fishery.

“In the quota regime the key is to be able to land high quality product in the required quantities when demand, and prices, are high,” Bruce said. “That can mean working at times of the year, and in places, when fishing is harder than it would otherwise be.

“As a result we often work outside, fishing and anchoring out up to 100 miles offshore. So we needed a boat that would enable us to do that with a degree of comfort, be able to hold a sizeable catch, and keep it in top condition,” he explained.

The big live tank capacity – up from 4.5 tonnes on the Cockmans’ previous fleet flagship – is critical to bringing in product that will attract the highest price. As Bruce says “it’s about lots of water, lots of air, and monitoring.” Holdfast is equipped with a Maretron system for tank level and flow monitoring.

Based on seeing Daydawn in action and their experience with their Southerly Designs 20 metre Safari (built for them in 2003), the Cockman’s had no hesitation in returning to the renowned design firm for the new boat.

Keeping the project local, including the economic benefits for their hometown, was one key factor in the Cockmans selecting Dongara Marine as the builder, though Bruce noted their various interests meant they weren’t on-site as much as they would have liked.

Ultimately it’s clear that close supervision was not necessary to ensure a highly successful build.

“This was the seventh boat we have had built,” Bruce said, “and despite it being the largest and most complicated, it was also the easiest build process.

“We were able to work really well with the guys at both Southerly and Dongara Marine. They continuously brought good ideas to the table, and they were also extremely responsive to our inputs. There was no quibbling over details and changes, everyone just got on with doing the right thing for the build.”

With highly experienced management, bigger facilities, and a larger, more diverse workforce Dongara Marine has quickly grown the capacity and capability to take on the lead role for larger projects. Accordingly it took the role of prime contractor for Holdfast, which is the first newbuild to come from the larger shed the company upgraded to last year.

Demand for Dongara Marine’s boatbuilding, refit, and specialist composite manufacturing services meant, however, that fabrication of Holdfast’s aluminium hull was subcontracted to Niche Marine in order to meet project timelines.

In addition to fabricating and installing the composite wheelhouse, Dongara Marine undertook all engineering and fitout; acid sealing and painting; electrical work; installation of the Windows West windows; and project management of all the specialist subcontractors who contribute to building a vessel of this size and complexity.

With overall and measured lengths of 25.95 metres and 23.95 metres respectively, the new Southerly Designs monohull shares its hullform with last year’s Daydawn. Bruce Cockman sees their “great boat” as evolutionary and rather than revolutionary.

“It’s basically a sistership to Peter Bailey’s Daydawn but each boat gets a few changes - that’s just natural continual improvement and customisation,” he said.

Compared to Daydawn, the wheelhouse on Holdfast extends further aft to provide more protection for the crew when working at the pot hauler, tipper and main cray tanks. This design change also results in a larger flybridge.

Within the wheelhouse, the port side helm station reflects the increasing levels of technology available to fishermen. Although Bruce says they “kept the electronics simple” the console is dominated by displays rather than steering and throttle controls (which consist of a joystick and levers respectively). Two large (42-inch) flat screen multi-function displays enable the skipper to access information of a variety types and sources. These include navigation information from the MaxSea system, Furuno radar, and Furuno AIS; vessel monitoring through CCTV; and data directly supporting fishing including that from the Smart Catch system and the WASSP multi-beam sonar system. Also fitted are a Furuno 1150 sounder and Simrad AP70 autopilot. The electronics were supplied by Geraldton Marine Electronics.

Also drawing power from the boat’s two Yanmar 25kVA gensets are arrays of external lights. This includes a huge bank of forward facing LED Stadium floodlights, deck lights, as well as underwater lights. All the navigation lights are Hella.

Having had electronically controlled engines in previous boats, the Cockmans were attracted to the simplicity of Yanmar’s mechanically controlled 6AYM-WGT main diesels. Supplied and installed by Brand Mechanical Services, each of the two engines is rated to 911hp, giving a cruise speed of 18.5 knots, exceeding the expected 17 knots, and a top speed of 23.5 knots. Pro Marine supplied the boat’s five-bladed, 39-inch Teignbridge propellers, which are driven via ZF 2000 gearboxes.

The twin props, dual pintle hung rudders, and a Side Thrust tunnel bowthruster provide excellent manoeuvring capabilities at all speeds.

While home ported in Port Denison, Holdfast is capable of fishing the length of the west coast. It has tanks for 8000 litres of fuel, ensuring a range of 600 nautical miles, and is in NSCV 2B survey for operations up to 200 nautical miles offshore with as many as 12 people onboard. Combined with the huge work deck, this provides flexibility to take on other roles, such as offshore support, in the future or when the quota allocation has been exhausted.

The below decks accommodation includes a three berth cabin forward, aft of which is a four berth cabin, with extra wide berths on bottom of the two bunk style arrangements, plus one double (actually queen) cabin and a 2 single berth cabins. A large U-shaped settee / mess is located on the starboard side of the wheelhouse, directly forward of the comprehensively equipped galley.

Dongara Marine used their expertise in sound insulation to ensure that all the wheelhouse and accommodation areas are very quiet, with 71db at full throttle being the result, and of course lower at cruising revs. Noise is very tiring on boats, so a great deal of effort was expended to achieve this result.

Asked for his highlights of the boat, Bruce Cockman discusses the process not the product. “The real highlight was just how good it has been working with Rohan and the team at Dongara Marine,” he said.

It’s a sentiment shared: “Building the boat for Bruce, Jeff and the rest of the Cockman family has been a great experience,” said Dongara Marine Managing Director Rohan Warr. “Holdfast is a real credit to them, to our team, and the suppliers and subcontractors who have been involved. It has been a big milestone in our company’s 40 plus year history. It demonstrates that we can deliver that the quality we have become renowned for at a scale that meets the needs of most Australian marine industry sectors.”

With Holdfast delivered, Dongara Marine is turning its attention to other projects. These include construction for a similarly large lobster boat, a Berkeley Class pilot boat, refit and repair work, and some smaller work boats. 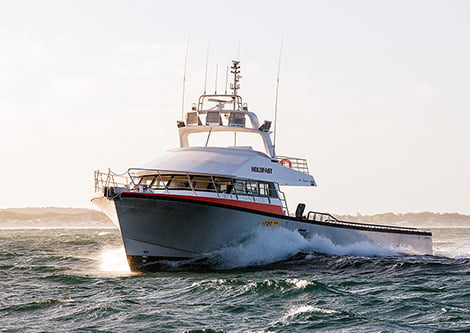