Another large capacity lobster boat from a team effort

Like 2016’s Daydawn, the design and construction of Gambler saw us team up with Xtreme Marine to produce a large crayboat designed by Southerly Designs.

Working constructively and collaboratively the team delivered the vessel on schedule and exceeded the contractual requirements for vessel performance.

Built for crayfishing along the Mid-West and Gascoyne coasts, the monohull has live tank capacity for 104 baskets – just over three tonnes – of lobster.

While slightly smaller than Daydawn, like the earlier vessel Gambler has the same MTU engines, features twin keels for assured directional stability and reduced roll, and has a resin infused composite wheelhouse.

Launched in November 2017, construction of Gambler commenced prior to Dongara Marine’s facilities expansion of the same year, so it was natural that Xtreme Marine would complete the vessel in Geraldton. Dongara Marine still played a significant role in this successful project, including:

“Dongara Marine was once again proud to work with other businesses from the Mid-West region to produce another high quality vessel for Kalbarri-based fisherman Ian Ralph.” 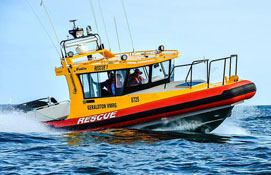