Ausmarine has organised another story about us, this time in relation to some of the ‘big’ things happening here.

Owners in the Western Rock Lobster fishery, including those looking to capitalise on the efficiencies of the latest generation big boats, have a new but highly experienced and qualified boatbuilder option available to them: Dongara Marine. What’s more it is transitioning its success to other vessel sectors.

With Rohan Warr and John Fitzhardinge as Directors, the Port Denison-based boatbuilding and refit company has never been short of talent and experience but until recently lacked the physical capacity to undertake boats of the size that are rapidly becoming the cray boat norm in Western Australia.

Rohan is a fully qualified shipwright who worked for a number of well known Western Australian boatbuilders before teaming up with John at Dongara Marine. He also has seagoing and commercial fishing experience, holding both Master V and MED II qualifications.

Having designed and built his first commercial vessel – a 24 foot crayboat – in 1961, and begun lobster fishing with a similar boat in 1962, Fitzhardinge is a household name in the Western Australian marine and fishing industries. When not fishing he and his wife Beth built boats for themselves and other fishermen, establishing Dongara Marine in 1975. He went on to be a founder of the highly acclaimed and successful Geraldton Boat Builders, and, through his directorship of Southerly Designs, has been responsible for designing literally hundreds of boats.

That unsurpassed knowledge and experience is now complemented by physical capacity, with a larger shed that can accommodate boats up to 24 metres in length, as well as an expanded workforce.

Industry reaction has been immediate and positive, with the first order for a large lobster boat already received and underway, a range of additional new vessels in negotiation, and refit work continuing apace.

Highly experienced local fisherman Bruce Cockman (Tebco Fishing) will get the first newbuild to come from the new shed. Currently the President of the Dongara Professional Fishermen’s Association and a member of the Board of the Western Australian Fishing Industry Council (WAFIC), Bruce has been involved with fishing his whole life. This includes more than 25 years skippering cray boats, as well as fishing in the Shark Bay Snapper, Shark Bay Blue Swimmer crab and deep sea crab fisheries. He currently fishes the A, B and C zones of the lobster fishery, and is also involved in the west coast shark fishery and the wet line fishery.

“We are absolutely thrilled that such a highly experienced and well-known fisherman has endorsed our capability by entrusting us with this order. We are really looking forward to delivering what will be a truly landmark lobster boat to Bruce early next year.”

With a measured length of 23.95 metres (78 feet) the new Southerly Designs monohull shares its hullform with last year’s ‘Daydawn’ and will have the largest capacity of any cray fishing vessel in Australia: 210 baskets or 6.2 tonnes of live lobster. Twin Yanmar 6AYM diesels will give a cruise speed of 17 knots, and 23.5 knots as a maximum.

Dongara Marine is the lead builder on the project, and will fabricate the resin infused composite wheelhouse, undertake all engineering and fitout, and manage all the specialist subcontractors who contribute to building a vessel of this size and complexity.

Demand for Dongara Marine’s services has, however, meant that in this instance the fabrication of the aluminium hull has been subcontracted to Niche Marine. This partnership has worked successfully in the past, notably on Dongara Marine’s most recent Berkeley Class pilot boat, AMG Winyama.

Those pilot vessels, like Daydawn, combine aluminium hulls with the resin infused composite wheelhouses Dongara Marine manufactures in-house for both its own projects and other boat builders.

With benefits including reduced weight for better stability and fuel economy; durability and protection against corrosion; thermal insulation; and high quality finish the resin infused composite wheelhouses are increasingly sought after by operators. Dongara Marine has recently been busy manufacturing one for Ian Ralph’s new 21.8 metre cray boat Gambler. For that project Warr’s team also fitted out the wheelhouse, enabling it to be quickly and seamlessly integrated with the hull built by Xtreme Marine.

For Bruce Cockburn’s new boat the composite wheelhouse has been extended further aft than on Daydawn. This provides better protection for those working at the pot hauler, tipper and main cray tanks as well as enabling a larger flybridge.

In addition to the two new cray boat projects, Dongara Marine has also been busy undertaking a substantial refit of a 16 metre cray boat as well as ongoing refits of a wide range of sea rescue vessels.

As with the Directors, this workforce complements boatbuilding capability with operating knowledge.

“A considerable number of our employees have extensive seagoing experience as crayfishermen, operators in the local and international oil and gas industry, and on charter boats. This is unusual in the boatbuilding fraternity and helps ensure that the boats we build and refit are efficient, reliable, and practical to operate and maintain in every detail.”

With a view to the future, the company has four apprentices working and learning under the guidance of its skilled tradespeople. It is also in the process of having its management system independently certified to the latest ISO 9001:2015 standard.

The company is continuing to focus on initiatives than can improve value for clients by providing the high quality for which it is already known more efficiently. This includes investments in new technology, the purchase of a CNC router being one example. This will significantly reduce the labour required to undertake the company’s highly precise fitout work and mould making, thereby boosting both productivity and throughput capability on future projects.

Those capabilities may well be put to good use in the near future, with Rohan Warr reporting that a number of newbuild projects are being negotiated, including another 24 metre cray boat and another Berkeley Class pilot launch for a new client.

The pilots boats, two of which are already in service, demonstrate Dongara Marine’s ability to enter in to new markets, and do so with great success. Fremantle Pilots has described the first-in-class Berkeley as “the best pilot boat available on the market” while Kim Lyons, the Managing Director of Argonaut Marine Group said: “We would have no hesitation in going back to them [Dongara Marine] for future projects” after taking delivery of AMG Winyama.

“Although both John and I have strong personal connections to the fishing industry, we see Dongara Marine’s capabilities extending well beyond that,” said Rohan Warr. “We continue to pursue new pilot boat projects, and feel we are now well and truly a highly competitive option for other discerning buyers of vessels such as patrol, rescue, and utility vessels. Our expanded facilities and workforce, and ongoing developments such as new plant and ISO certification, are investments into better serving our existing markets as well as stepping in to those new ones,” he concluded. 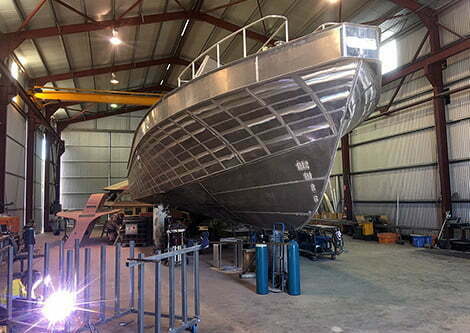