The long-established relationship Dongara Marine’s Directors have with the Western Australian Government’s Fisheries agency continued with the award of two Department of Primary Industries and Regional Development (DPIRD) contracts in August and October 2017.

Both contracts were for work performed on the long range fisheries patrol vessel PV Houtman. Dongara Marine Managing Director Rohan Warr supervised the 20.75 metre long vessel’s construction when he was an employee at Western Boat Builders.

The first contract award to Dongara Marine in 2017 was to undertake urgent repairs on the vessel after it sustained damage when at sea during extreme conditions. Dongara Marine’s ability to respond quickly to this unforseen need, despite itself being engaged in both the Holdfast and Gambler contracts at the time, demonstrated our responsiveness to customer needs, and the flexibility and capacity of our in-house capability.

The scope of urgent repairs undertaken by our MSU (mobile service unit) included structural repairs to the front windscreen, replacing three forward screen windows, and replacing fitout: 80 per cent of that in the wheelhouse and 50 per cent of the accommodation.

A little over two months after the repair work commenced, the DPIRD awarded Dongara Marine a second contract, this time for planned maintenance.

Completed over a two-and-a-half month period, the maintenance work commenced with the Fisheries crew delivering Houtman to the service jetty in Port Denison. Dongara Marine took over at that point, firstly hauling the vessel from the water and removing the main engines for rebuilding. Simultaneously Dongara Marine’s in-house team set about removing all fittings from the vessel, including the bimini, to allow for a full blast prior to the commencement of painting. The team stripped the hull of all the old lacquer, undertook multiple fabrication repairs and modifications, and applied filler to the wheelhouse before applying the multi stage paint system. Some interior modifications were also implemented.

Upon completion of all paintwork and fitout, the vessel and systems were recommissioned. Dongara Marine’s capabilities meant nearly all tasks were completed using in-house staff and equipment.

We then re-launched Houtman and conducted sea trials.  The end-to-end service completed with full cleaning and detailing, and delivery of the patrol boat to Geraldton.

NB: Following on from these projects, Dongara Marine was awarded, and undertook, a major refit of DPIRD’s PV Pelsaert during 202o. (see Project).

“The follow on refit contract demonstrated the Department’s satisfaction with the work carried out under the earlier repair contract.” 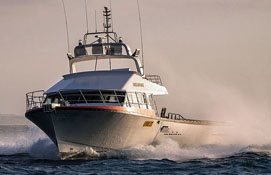 Holdfast was the largest capacity high-speed crayboat in Australia when we launched it in early 2018. 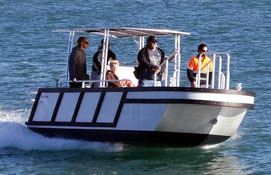