Prior to bow fender installation

Prior to bow fender installation

Dongara Marine’s growing reputation as a supplier of high-quality custom vessels for harbour service roles was underlined with the delivery of our second work boat for operation Port Hedland, the world’s largest bulk port, in late April 2019.

Owner Jetwave Marine Services approached Dongara Marine after learning of the our first Bulldog Class work boat which was delivered to the Pilbara Ports Authority (PPA) in mid-2018.

Jetwave Marine Services wanted a similar design but customised for work as a lines boat. It also had a preference for diesel inboard and waterjet propulsion rather than the outboards used on the PPA’s vessel.

The dimensional variation reflects and enables the propulsion change, including providing for an open transom with duckboard to both protect the waterjet and enable lines to be efficiently handled over the stern.

Other features that reflect the vessel’s use for lines handling include:

Jetwave Marine Services is also using the vessel to transfer personnel within the port, and thus Jetwave Stanley Point was placed into AMSA NSCV 2D survey for up to six passengers and two crew.

“We sought and received bids from a number of builders offering various designs, but ultimately determined that the Dongara Marine offer provided us with the best combination of performance, quality, and after build service.”

Jetwave Stanley Point sea trials. She is the first of 4 new assets making their way to our Port Hedland Operations #oceandriven #jwms #jetwavemarine

Posted by Jetwave Marine Services on Sunday, 26 May 2019 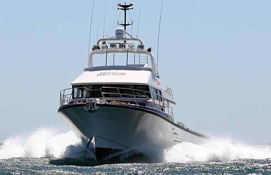