Some more media interest in the performance of our Berkeley Class pilot boats following a successful SAR operation off the WA coast last month. Stay safe everyone! Here’s the article that was written.

Fremantle Pilots’ pilot boat Berkeley has an enviable reputation within the industry for high performance in challenging conditions. In January it extended that reputation into the public spotlight through its pivotal role in a dramatic night search and rescue.

With Fremantle Ports Small Craft Masters Dave McDonald and Peter Fellowes, as well as Fremantle Pilot Captain Jeremy Parkin onboard, Berkeley searched for and recovered three people who had fallen overboard from their recreational RIB and then treaded water for many hours in rough (2 to 3m) seas in Gage Roads.

Berkeley’s transom-mounted man overboard recovery platform, remote coxswains position on the aft deck, and large internal and external deck spaces make it well-suited to such tasks. So does its speed and seakeeping performance, which enabled the pilot boat to rapidly transfer the rescued persons, who required urgent medical attention, back to Fremantle and waiting ambulances.

The ability to operate successfully in demanding west coast conditions is no surprise given the Berkeley Class was developed by Southerly Designs and Dongara Marine, two companies with decades, and hundreds of boats, of experience producing similarly high speed vessels for the Western Rock Lobster fishery.

Berkeley, their first purpose-designed and built pilot boat, was so successful that it became the first pilot vessel to be purchased by Fremantle Pilots. The organisation has been providing pilotage services since 1844 and operating as a private company since 1994. Previous pilot boats have all been owned and operated by the Port of Fremantle.

Prior to the purchase Fremantle Pilots undertook an in-depth analysis of various pilot boat options available. Commenting at the time, the company’s then Managing Director, Captain Greg Tonnison, was unequivocal about the results of that rigorous assessment process.

“After using Berkeley for over a year, and undertaking a detailed financial and operational analysis of it and other options, it was clear to us that the Berkeley Class is the best pilot boat available on the market.”

Prior to the acquisition the pilots had extensive first hand experience of Berkeley as it had been operating in Fremantle since June 2015, giving them well over a year, including two demanding winters, to acquaint themselves with the boat. It had proven capable of achieving 33 to 34 knots under operational conditions and established itself as a genuine all-weather boat under demanding Indian Ocean conditions.

“Whereas in the past Fremantle has typically operated with two pilot boats – one faster one for quick transits in good sea conditions and a slower but more seakindly vessel for heavy weather – Berkeley has become the pilots’ vessel of choice, fair weather or foul,” Captain Tonnison said at the time.

“It has excellent sea-keeping capabilities and incomparable comfort of ride as well as excellent stability, hull interaction, manoeuvrability, wheelhouse visibility and layout,” he said.

Strickland summed up his team’s view of the vessel in emphatic terms, saying: “At 18.5 metres measured length and just over 19 metres overall with a 6.1 metre beam, the designers have achieved the perfect-sized pilot vessel to operate on our coast and particularly for the wave periods and sea states encountered off Fremantle.

As important, and impressive, as the Berkeley Class’s on-water performance is, Tonnison said it was imperative that his team assured themselves that selecting it represented a sound, long-term operational and financial decision.

“As part of that process Fremantle Pilots undertook an in-depth analysis comparing, in particular, the maintenance, fuel, and other operating costs of various contemporary pilot boats,” he said.

“Informed by detailed historical operating data for other pilot vessels, our study expanded and clarified information provided by boatbuilders to provide a comprehensive and truly comparable data set for the various options.

“This rigorous process, combined with our operational experience, confirmed our opinion that the Berkeley Class is the Rolls-Royce of pilot boats, and gave us every confidence that buying Berkeley represented the best value investment,” he concluded.

Some three years after the first Berkeley Class was completed, Fremantle Pilots, Fremantle Ports and three very lucky boaties are not the only ones delighted that Dongara Marine entered the pilot boat building business. Argonaut Marine Group took delivery of the second in class, AMG Winyama, in mid-2016 and continues to operate it successfully in the Port of Dampier.

With Berkeley and AMG Winyama both demonstrating the performance advantages of this Australian-designed and built pilot boat class, and both outright purchase and lease options available, interest in further vessels has been strong, prompting Dongara Marine to commence construction of a third Berkeley Class. 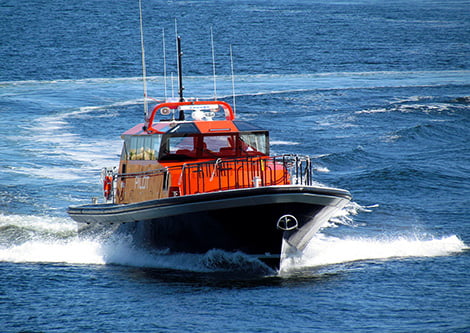