Here’s an article that was written for Ausmarine magazine about one of our recent crayboat refits.

A Star is reborn

With somewhat of a resurgence in the number of new boats entering the western rock lobster fishery in the last couple of years, and more on the way, the casual observer could be forgiven for assuming that older boats are, literally, passed their use-by date. Wiser heads, however, recognise that with the right care and attention, quality boats can continue to fish well.

Greg McDonald, John Fitzhardinge, and Rohan Warr have just that kind of wisdom and experience, and have combined it to revitalise the classic 52 foot crayboat Meridian Star.

Boats designed by Southerly Designs and produced by Geraldton Boat Builders (GBB) are revered for their quality and performance up and down the West Australian coast, so it’s not surprising that one of their boats was deemed worthy of a significant investment after 30 years on the water.

More of a surprise given their legendary status is that Fitzhardinge, who designed the boat and was a Director of GBB when it was built, says Meridian Star is now better than when launched. Credit for that goes to Warr and the team at Dongara Marine, which undertook all aspects of the refit, from hauling the boat out to relaunching and trialling it some three months later.

Owner Greg McDonald has been involved in commercial fishing for decades and, like Fitzhardinge, knows Meridian Star very well. In fact the boat was originally built for him, and fished for the family from Kalbarri and the Abrolhos for 10 years until McDonald built a larger GBB, which he still owns. Meridian Star was sold once more before McDonald bought it back recently for his son Jack to fish with.

Naturally he wanted it to be in tip top shape for his son which led him to chose to undertake a refit at Dongara Marine.

Warr explained that the work list was extensive and varied, calling on the company’s in-house capabilities in trades including aluminium fabrication, fitout, painting, and electrical.

“On the fabrication side we replaced some sections of side plating where there was some corrosion from the salt coming into the engine room vents. We also replaced the pot rails and fabricated and fitted a side awning and flybridge screen,”

“Internally we completely refitted the accommodation and wheelhouse, which included mostly new joinery in the wheelhouse, new air conditioning and new upholstery. We also fitted with new direct glazed windows.

“We also blasted and painted the boat inside and out, insulated the engine room, and did a partial rewiring.

“All of this was done in house as we now have a complete range of services available,” he added.

Commenting on the results Fitzhardinge says Meridian Star is:

"like a new boat now, probably better than when new.”

Fitzhardinge and Warr are pleased not only with the results of the refit but to have been able to help maintain the personal connection between Meridian Star and the McDonald family.

“Jack is rightly proud of his family’s connection to Meridian Star,” Fitzhardinge says, “and to have been involved in delivering the boat to both father and son is also a special occasion for me personally.  It really underlines the importance of relationships in our business.”

Warr said he looked forward to continuing the connection with the family and the boat into the future.

“With the work we have undertaken, Meridian Star certainly has many years of good fishing left in her, and all of us here wish Jack and Greg well for the seasons to come. We will be watching with interest to see how the boat performs,”

“While we certainly don’t expect any issues, we hope we can keep helping out the McDonald family with any maintenance and refit work into the future. Who knows, perhaps one day we will be lucky enough to build a new boat for them.”

On the newbuld front, Dongara Marine is well advanced with the construction of a 78 foot Southerly Designs crayboat for Bruce Cockman (Tebco Fishing). The bare hull, which was subcontracted to Niche Marine, arrived in Port Denison in September. Dongara Marine will complete all other aspects of the build, including the composite wheelhouse fabrication and fairing of which was completed even before the hull arrived. When launched in early 2018 it will have the largest capacity of any cray fishing vessel in Australia: 210 baskets or 6.2 tonnes of live lobster. 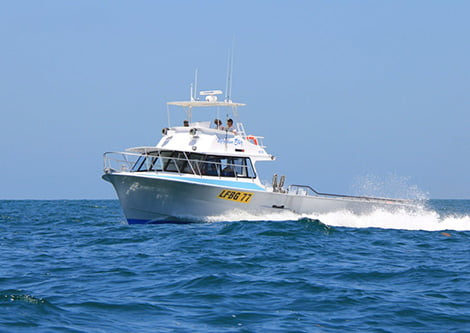