Securing repeat business is often cited as a hallmark of great capability and customer focus, and many consider Government organisations to be the most meticulous clients. As such recent projects demonstrate, once again, Dongara Marine’s complete service capability.

That follow-on contract was completed from March through to mid-May this year.

The crew of the 20.7m aluminium monohull delivered it to the service jetty in March. Reflecting the trust placed in the Dongara Marine team, Fisheries let Rohan Warr and his skilled workforce take charge from there, including hauling, painting, re-launching and trialling the boat.

Once the boat was out of the water the engines were removed to be rebuilt by Craig Pike at Pike’s Enterprises.  Simultaneously Dongara Marine’s in-house team set about removing all fittings from the vessel, including the Bimini, to allow for a full blast prior to the commencement of painting. They stripped the hull of all the old lacquer, undertook multiple fabrication repairs and modifications, and applied filler to the wheelhouse in preparation for applying the multi stage paint system.

In keeping with Dongara Marine’s standard practice, Akzo Nobel primers and premium Awlgrip marine paints were used. “We have been using this high quality paint system with great success for many years now,” Warr explained.

While all this was going on, one of the company’s shipwrights was meeting crew requests for some small interior modifications.

With all paintwork and fitout completed, it was time for the vessel to be put back together including re-installation of all external fittings, the Bimini, electrical fittings and electronic equipment. Dongara Marine’s expanded capabilities meant nearly all tasks were completed using in-house staff and equipment. The only exceptions were specialist areas: Craig Pike completing the mechanical installation and Geraldton Marine Electronics re-installing the high end electrical and navigation equipment.

Underlining the full-service capability Dongara Marine provides its clients, they re-launched Houtman on their new hydraulic jinker and then conducted sea trials in conjunction with the authorised mechanics.

During those trials the Southerly Designs designed patrol boat achieved 26.5 knots, consistent with the performance when new. “That’s a very good result considering the boat is now eight years old,” Warr said.  Dongara Marine’s Managing Director has extensive knowledge of the boat, having worked with Terry Bromley at Western Boat Builders when it was built in 2009/2010 before joining John Fitzhardinge at Dongara Marine.

“It’s been great to work with the Fisheries guys over so many years,” he said. “We appreciate the faith they have in us, and I think it is safe to say they appreciate the service we provide.”

Dongara Marine’s end-to-end service for Fisheries continued through full cleaning and detailing, leaving Houtman safely berthed in a pen in Geraldton by mid-May, ready for the crew to come aboard and embark on their next mission.

“This complete service capability is something that Dongara Marine now prides itself on,” Warr said, noting that the company’s expanded facilities now include a dedicated blasting and painting shed. “As the Houtman project shows we can now blast and paint vessels up to 22 metres long in a controlled environment.”

Expansion in both facilities and the number and skills of personnel has proved successful for the company, with work now booked through to early 2019. This includes several large projects, such as a 24 metre cray boat under construction for the Western Rock Lobster Fishery.

“While busy with the range of new construction, refit, and repair work we have lined up we continue to pursue additional opportunities across all those areas for commercial, government, and recreational clients,” Warr clarified. “If a client has a need, we’ll always do our utmost to meet it. As busy as we may get, our door is always open.” 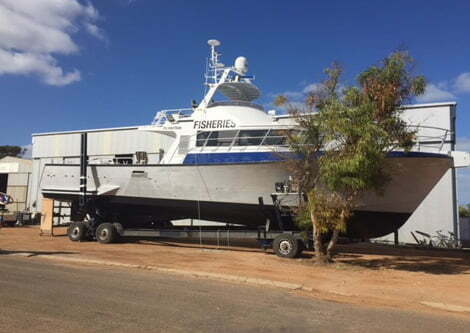